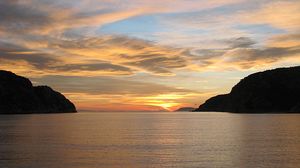 Weather in Halkidiki  and the Climate of Chalkidiki in 2023

Halkidiki is one of the 7 areas of Central Macedonia of Greece. It has 2 large mountains Holomontas in the north and Mount Athos to the southeast. With the exception of the North, it is surrounded by the sea and has 3 large peninsulas Kassandra, Sithonia, and Athos. Halkidiki weather and climate have large differences between the mountainous north and the seaside south that create a lot of micro-climate areas. These micro-climate areas are subject mostly to altitude and distance from the coast. Generally, winter has moderate low temperatures with moderate rains and snowfalls (in the mountainous center north) from Late November to early April. Summer is warm with a few showers. The climate in Halkidiki is very different than the Northern closest larger city of Thessaloniki weather.

Halkidiki weather temperatures all year from January to December 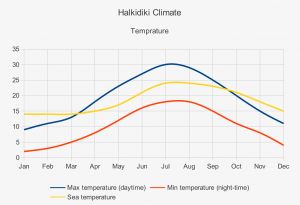 At the beginning of winter a combination of high pressure in the Balkans with low pressure in West Aegean and later South Aegean, The result of these conditions is substantial rain or snow depending on temperatures. North winds especially north-west affect mostly the West coast and West Kassandra and much less the west coast of the other two peninsulas. Waves at the west are substantial but less between the peninsulas.

While the winter is progressing and at the beginning of the spring the barometric combinations are replaced by cold air masses moving from the northeast, rains and snow are far less and Eastside is greatly affected. Waves on the east side of Mount Athos and the Southeast of Sithonia is substantial.

Between the peninsulas in the North of the waves of the bay are not really a problem.

In the spring cold air mass invasions gradually stop and when we have low pressure in the Aegean Southerlies affect almost all of Halkidiki’s coastline. The waves are much larger than the actual wind. Rains are much less and gradually the first thermal clouds start to appear over mountain mass.

While Spring is progressing the weather is generally excellent and a sea breeze starts to appear mainly in the afternoon hours. This sea breeze is a local wind and depends on the characteristics of each area. Some general properties are:

The wind during the Spring is weak, and near the shoreline, breeze is happening almost every day, while over land, especially when there is atmospheric instability we have local storms that can even produce some hail.

In the Summer high barometric pressure systems prevail. These systems don’t create winds but, mostly early in the season, because of atmospheric instability may produce local brief squalls over land. The maximum temperature is affected greatly by the sea breeze which is stronger as the difference between sea and land surface temperature becomes larger.

Obviously, for travelers/tourists, this kind of climate information is very important. Read carefully before planning your 2023 holiday to a Halkidiki resort. Plan some flexibility on the date you will go see the monastery of Mt Athos, visit Ouranoupolisis or try Greece nightlife. Check out our Halkidiki maps page too.
Also the weather effects sometimes Thessaloniki airport. early Spring or late Autumn it is not unknown for the low thick fog to force the airplanes to land at an airport a couple of hours away from Thessaloniki.

Gradually the famous Aegean Meltemi winds pick up strength and start to affect Chalkidiki while in the morning hours, there is a light wind going from land to the sea. The Meltemi or “Etisies” are North East winds in North Aegean that pick up strength after sunrise and slow down after sunset. Starting in July, their maximum comes in August (and may locally reach gale force in the south Aegean). They greatly affect Halkidiki, especially the east peninsula coasts. In May and June, the Meltemi is mild in Halkidiki, as in September and October. The closest large city, Thessaloniki is not affected by the Meltemi or the weather in Halkidiki in general as is in a different climate system.

In these areas, the wind will pick up in the afternoon right before sundown. In areas where the terrain morphology makes it possible, they may cross to the west affecting the local sea breeze. On the East side of the South of Sithonia the more south we go, the larger the waves. North areas of the golf there is no waves problem from the Meltemi.

At the end of the Summer and beginning of Autumn, the Meltemi and the sea breezes become weaker. But when there is instability local storms are created over the sea and the cost that continues to the early evening. Gradually Both Meltemi and breeze stop entirely, low winds, the good temperature is standard until the first cold winds start coming from the North. Generally, the first sustained rains are an indication that winter is close.

Halkidiki rainfall from January to December 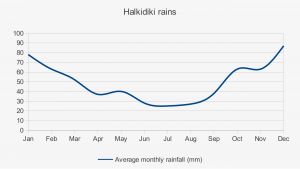 send us an email to

send a message via WhatsApp

call us on Skype

call us or text us on Viber

send a message via  Messenger

April is generally not considered a good time to visit Halkidiki Peninsula as the weather is quite cold and wet. The temperature during this time ranges between 9-19°C making it too cool for swimming or sunbathing. It is recommended to plan your trip here in the months of June through September if you want to experience pleasant beach weather.

Halkidiki weather in May 2023

May is an ideal month to spend time in Halkidiki Peninsula with warm temperatures and dry weather. Temperatures during this month are usually around 20°C, while they frequently reach a peak of 24°C. Showers typically happen on a few days throughout the month. Visitors may want to consider visiting Halkidiki Peninsula later in the summer months if they wish to take advantage of warmer sea waters for swimming.

If you’re looking for sunny weather and balmy temperatures to go along with your beach holiday, Halkidiki Peninsula in June might just be the perfect destination! This Mediterranean paradise has some of the hottest and driest weather of the year during this summer month. Expect an average temperature range from 16°C (60.8°F) to 28°C (82.4°F), plenty of sunshine, and calm waters for swimming, making it an ideal spot for sunbathers!

September is the perfect month to visit Halkidiki Peninsula, Greece! The weather this month is sunny and dry, with temperatures reaching up to 25°C (77°F). Water temperatures are still warm enough to swim, but not as hot as during the summer months of June, July, and August. There’s no need for an umbrella or raincoat – it’s all sunshine!

October is a great time of year to visit the Halkidiki Peninsula for a sunny getaway. The weather is pleasant and warm, with daily temperatures ranging from 11-18 degrees Celsius. October is also one of the dryer months in the area, making it ideal for beach trips and outdoor activities. With sea temperatures as high as 22 degrees Celsius, it’s also a great month to go swimming!

Categorised in: Weather in Greece